Graham Smith is married with a  young son. A time served joiner he has built bridges, houses, dug drains and slated roofs to make ends meet. For the last eleven years he has been manager of a busy hotel and wedding venue near Gretna Green, Scotland.

An avid fan of crime fiction since being given one of Enid Blyton’s Famous Five books at the age of eight, he has also been a regular reviewer for the well respected review site Crimesquad.com for over two years

When not working, his time is spent reading, writing and playing games with his son. He enjoys socialising and spending time with friends and family. 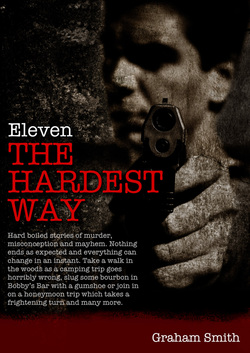 Visit the Amazon page for Eleven the Hardest Way
Eleven hard boiled stories of murder, misconception and mayhem. Nothing ends as expected. Everything can change in an instant. Tense, thrilling and funny. You’ll be cheering on, laughing at and crying for the characters.

Take a walk in the woods with Annie as a camping trip goes horribly wrong, slug some bourbon in Bobby’s Bar with gumshoe Leonard
Peters or join Nicholas and Christine as their honeymoon trip takes a frightening turn.

Attend a night class with the girl who fears a stalker, escape killers with Jason and his sons, join Cook & Barnes as they hunt a twisted killer, look through a telescopic sight with an assassin and recoil in horror as terrorists attack.

Why has Garry been stood up at the altar? What happens to Susie? All the answers you need are in Eleven The Hardest Way. 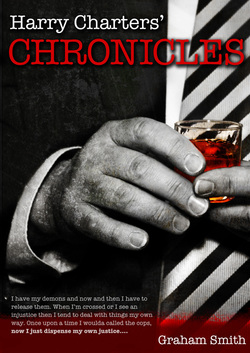 Visit the Amazon page for Harry Charters Chronicles
Join gumshoe detective Harry Charters as he tries to escape his demons with a shot of bourbon and a mystery chaser.

His investigations include a rigged poker game, a missing teenager and tales of domestic strife. He also gets himself into the middle of gangland power struggles and comes head to head with a crime family who run an entire town.

Harry Charters is not the kinda guy who calls the cops. Instead he dispenses his own brutal justice as he rights wrongs and settles balances. Will he come out on top or will the bottle get the better of him? Read Harry Charters Chronicles to find out.

Graham Smith on the Web