Adduné: Part I. The Vampire's Game by Wendy Potocki

Join Miranda Perry on her harrowing journey into the dark world of vampires. In this three book series, Miranda Perry unwittingly becomes embroiled in a merciless game of revenge. She will need all her wits to overcome this ultimate evil as she battles to save her soul—and the souls of everyone she loves.

Adduné: Part I. The Vampire’s Game is the first in the trilogy and sets the stage for the adversities and tragedies soon to befall her.

Still shaken from the untimely death of her father, Miranda is forced to ascend the corporate ladder and takeover his empire. She begins the arduous task of overhauling Perry Antique’s outdated cataloguing system. She soon discovers an object that her father hid from the world—a priceless, undocumented Faberge egg. Its interior holds two rubies: one is heart-shaped, and the other a marquise cut stone that represents a single droplet of blood. In attempting to ascertain its authenticity, she becomes a prime target. Due to another’s sin, she's placed her in the crosshairs of a cunning vampire named Adduné. He becomes consumed with exacting vengeance on her as payment for an unpardonable transgression—an offense that demands the ultimate punishment. 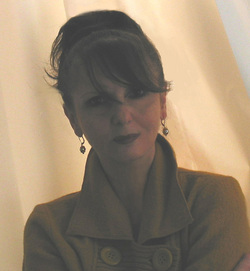 Wendy Potocki lives and writes in NYC. If that isn't scary enough, she writes in the genre of horror. She feels creating good horror is an art form. She religiously devotes herself to pursuing it over hill and dale … and in the crevices of her keyboard.


She has four self-published novels: The White Lady Murders, The Horns of September, The Man with the Blue Hat, and her latest, Adduné: Part I. The Vampire's Game. Book trailers for many of her works may be found on her official website http://www.wendypotocki.com/. Her next planned projects are Black Adagio, The Virgin, and the second installment of Adduné entitled The House of Cards. The Adduné saga is a three book series that is as much as an adventure to write as to read. "Many, many hours of research are going into making this a sweeping, exciting tale about love, revenge and the hidden power lying dormant within the soul."


In her spare time, she loves to go for long walks, drink Starbuck's Apple Chai Lattes, make devotional offerings to her cat named Persephone, and be stilled by the grace, beauty and magic of ballet.