ACID JAZZ SINGER, Book One in the
Hunger Hurts Series 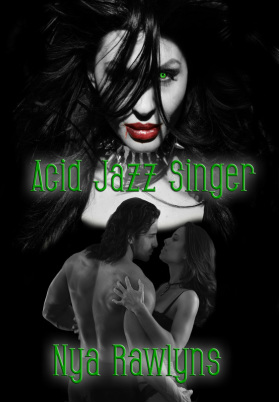 Her name was RayLee. They called her the Acid Jazz Singer, her sultry voice mesmerizing human and demon alike. She’d been running for three years from her maker and only Travis McKenzie stood between her and the darkness that had become her life.

Travis hunted the hit squads of demons and paid lip service to the Sheriff of the city. The half-blood had gifts, of the magic, shifting kind—and something more. It made him a stone cold killer and the only thing that mattered in his life was safeguarding the woman he was falling in love with.

Vladimira was the oldest of her kind, an enforcer—a gun for hire to the highest bidder. Vamp, human, demon. It didn’t matter. It was all about the job … until the stakes changed and she found a reason to care.

The singer and the protector had a history. But that history changed when a southern bigot vamp turned Travis’ friend into a travesty—neither man, nor woman … but both. Travis fell hard for the trannie known as RayLee. He was having a harder time dealing with his best friend, Ray.

Then the game changes, and Travis and Ray have to rely on an assassin with a secret agenda and uncertain loyalties.

When the demon comes to claim Ray, Travis must walk through the bowels of hell to save the only being on earth he cares about.

The problem is …  who is going to save Travis from himself?

The stink got me retching again. You never got used to it. They used terms like coppery or a taste of iron, as if death had a flavor of the week. Metallica clinging like satin glue to my blade. I was tempted, sorely, to lick it clean but Ray’s situation had cured me of that … maybe. The urge was still there and there was, as they say, no accounting for taste.

I had to dial down the buzzing in my ears, incessant tonight, jarring and so far beyond irritating I damn near cried. Instead I doubled over, heaving the last of the tequila over the swarm of maggots flowing in a riot of orgasmic waves over the ragged stack of body parts, what was left of them. The dumpster and the demon pile were the only things occupying the alley behind the club.

I really needed to hire a clean-up crew but Ray and our bartender, Joleen, had blown all our cash on what they called ‘costumes’. You’d think he’d know better by now. We couldn’t keep running forever and this crapola piece of shit he called a nightclub wasn’t paying the bills, not even close.

Ray’s idea of laying low was a little left of too stupid to live, something he’d become the poster boy for ever since we hauled ass from South Beach. We’d ended up in the back of beyond in Camden, New Jersey, across the Delaware River from Philly. My hometown, not his, but at least I knew my way around and there were a few chits I called in to ease the introductions.

“You okay out there, hon?” Joleen’s husky voice echoed behind me, slicing through the haze. She’d be peeking around the screen door, eyes squeezed shut, certain the ‘haints’ had gotten me good this time. Little did our bartender know.

“Yeah, I’m good, go on back to the bar,” I managed to croak past the thick bile still coating my tongue. Going on a bender hadn’t been my best choice for evening entertainment. Not when I knew what was stalking us.

“You sure, boy? Because I…” She let the offer trickle off. There was no “I” with Joleen. She’d be less than useful in helping me clean up the mess I’d made, her intestinal fortitude hovering in the zero tolerance range. How she put up with our clientele always gave me pause, considering how some of their outsides didn’t look a whole lot more appetizing than the pile of shit I found myself nudging with my Doc Martens.

The smell wasn’t so bad now, the wards I’d put on the area finally filtering the worst of the contamination away. Having a little magic at my fingertips was handy, even if what I could do was limited. I could hear the scuffling as the one that got away headed south at a limp. It had been nailed but not disabled. I debated whether or not it was worth my time to go after it.

The squeak of the screen door alerted me that two hundred and fifty pounds of attitude and spandex and curiosity were about to complicate my decision process, such as it was.